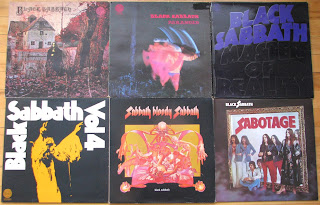 To commemorate scoring Black Sabbath concert tickets for the April 20, 2014 show in Calgary, I decided to make my largest and longest post yet. Most of you wouldn’t give a crap about this stuff, but please indulge an old man and his neurotic hangups.

Thanks to my ongoing sell off of duplicates and other unwanted hardcore and punk records, I was able to concentrate on acquiring something I thought completely unachievable in the past. Original, first press, UK copies of the first six Black Sabbath albums.

Getting into Sabbath, or any early hard rock collecting, is just on a different level from punk and hardcore collecting. You start venturing into the realm of the creepy, 60 year old, know-it-all types that you find at record swap meets. They operate on a completely different level when it comes to record prices, variants and most of all, condition. Since we are talking about 40+ year old records, it is a major issue.

After doing lots of online research, I was able to get a handle on what the first press/first issue records were, what the distinguishing signs or marks were, and what I should be looking for in the credits and matrices. After one furious month, I had it done.

My only condition for buying was that I needed a first press (or close) and that the vinyl had to be EX or NM. A tall order for old records with high demand. Funny thing though, apparently all you need is lots of money and you can get anything you want!

One of the first things I heard from the hard rock community online is that when it comes to Black Sabbath records, the best are the original UK pressings. They are apparently far superior in sound quality to the European or North American ones. Audiophiles are a funny breed. They can detect and hear shit the rest of us can’t. With their descriptions of music as airy, warm, dry, and coarse, I’ll take their word for it. 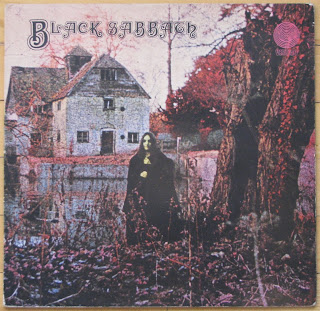 We might as well get started with the self titled first album. This was pressed in 1970 on Vertigo Records. The Vertigo swirl found on the cover, labels and inner sleeve are considered classics in collecting. The inner sleeve alone can sell for $50. 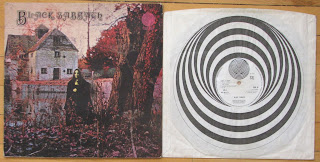 This copy I have is a second version of the first press as the B side label is missing the “A Phillips Record Product”. The matrix, catalog number and sleeve are all unchanged. 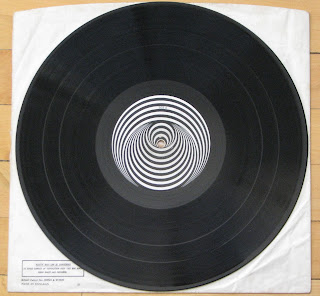 The original Vertigo album comes as a gatefold which is way cooler that the simple standard sleeve we got here in North America on Warner Brothers. The layout starts the band down that slippery Satanic slope they tried in vain to dig themselves out of. An inverted cross will tend to do that. 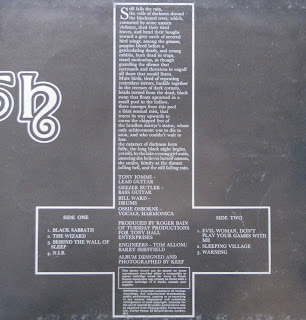 I dig the inside of the gatefold big time. 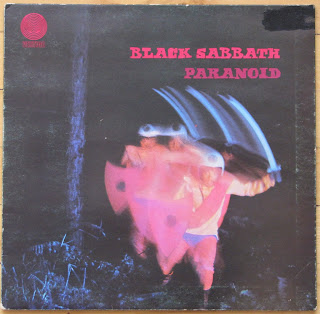 Second we have Paranoid. This one is also on Vertigo with the swirl labels, inner sleeve and cover. 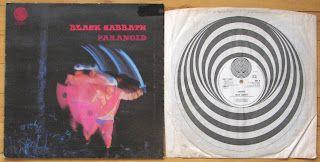 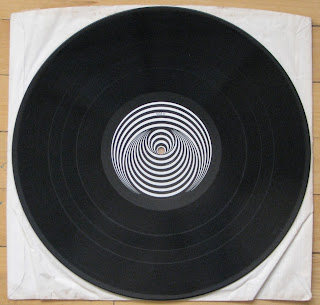 The layout is close to the same as the WB one we got here with the exception of the color and some of the written text. I don’t know what it is in the design of these gatefolds, but they are so much much better than the ones we have now. They don’t crack or fold any of the cardboard if that makes sense.

Unfortunately, there is some sticker removal damage on the front. Not the worst thing ever, but compared to the rest, I may have to upgrade some day. 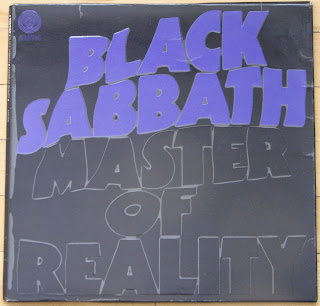 Next up is the collector’s wet dream. First press Master of Reality on Vertigo Records. This was unique as the first press came in a laminated and embossed box style cover. The album opened from the top with a flap which contained the record and a six panel poster of the band.

Due to the age of this record, finding a copy with no box damage, the laminate still intact, and complete with an original poster is rare. Rare means expensive. Really, really expensive. I’m glad someone bought all my Poison The Well and Thursday records! Later European Vertigo issues had a standard sleeve and smaller poster. Fuck that though. Go big or go home. Accept no substitutes! 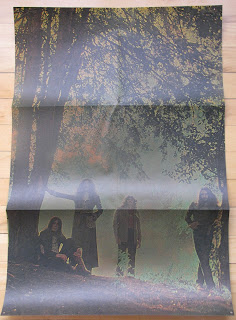 This one was unique for Vertigo as the labels and inner sleeve were inversed with white on black as opposed to the standard black on white. The inner sleeve with this one is in near mint condition as well. 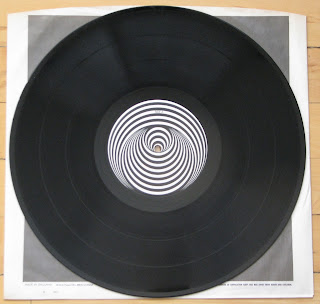 This was also the first time the band went with lyrics and credits on the back cover as there was nowhere else to go with the box style. 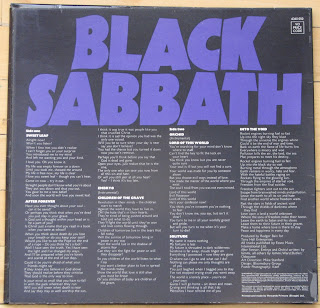 This one is easily my crown jewel of the collection. The laminate is 95% intact and that is way better shape than most. This is becoming super hard to find in top condition. So happy to have this. 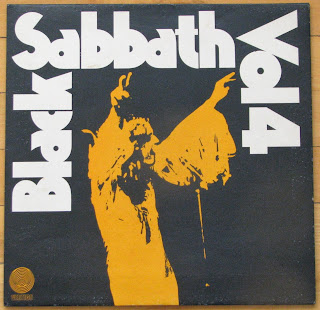 Next up is Volume 4. This one is also on Vertigo Records and comes complete with the swirl on the gatefold sleeve, labels and inner sleeve. 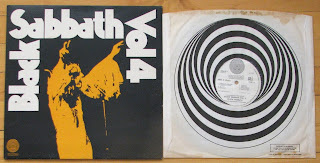 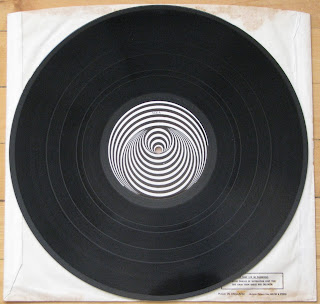 Another big feature is the gatefold comes with a booklet insert attached at the fold. I was so happy to score one that was not only attached, but in such great condition. 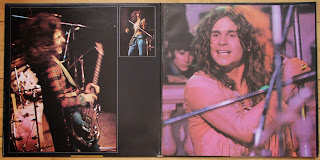 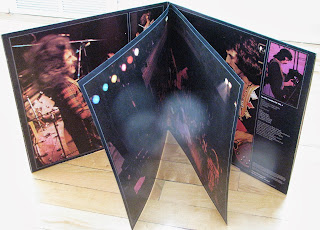 This is a legit first press with “Porky” and “Pecko” etched matrices, “VO Price Code” on the back cover and no song lengths on the inner cover. I bought this online through a private deal outside Discogs or ebay. I was kind of scared to say the least. When this arrived as described and in perfect shape, it was one of my happiest days of the year. 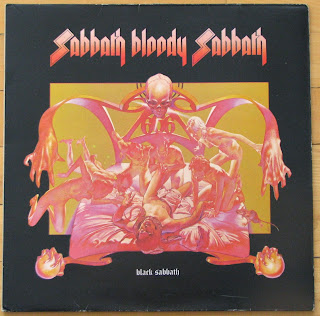 Things take a turn with the next album Sabbath Bloody Sabbath. The band was fully coked out of their heads at this point and getting robbed blind by their label and management. As a measure to remedy the situation, and give the band more creative and financial freedom, they moved to the short lived WWA label. 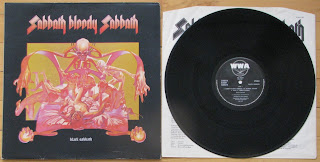 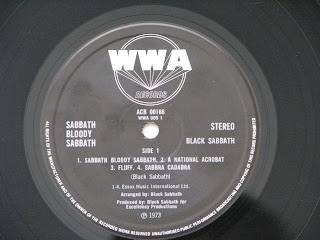 WWA would end up repressing their entire back catalog, but Sabbath Bloody Sabbath was the only first press release the label would have. This version is so awesome just for the fact it came in a gatefold sleeve with this awesome trippy picture of the band. The Warner Brothers version here had none of this.

It also comes with this awesome double sided inner sleeve with lyrics and credits. Mine has some creasing on it but you can’t have everything. 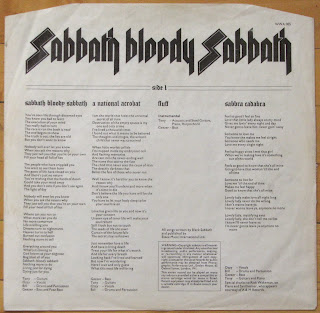 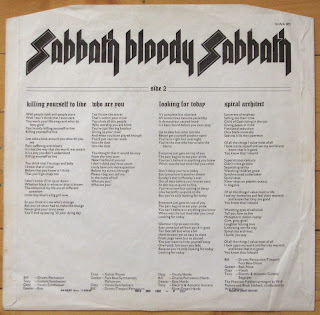 I might have to try and run down some more WWA presses. Word is they are pretty rare and just as collectible as the Vertigo stuff. I might need a second job though. 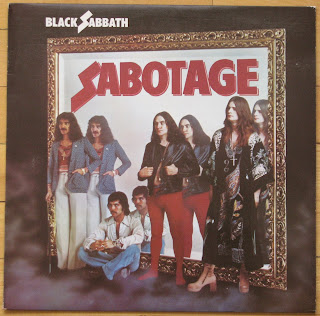 Finally, we have the Sabotage album. The UK first press was released on NEMS Records. I only knew NEMS as the label that released Live At Last. Back in 1980 we all thought it was a bootleg as it wasn’t on Warner Brothers and it came out after Dio was already around for Heaven and Hell. Oh, the days before the internet!

Sabotage was pretty light on bells and whistles. Standard sleeve but with a weird paper texture that is different than the normal glossy one usually used. Other than that, it isn’t too different from the Warner Brothers version. 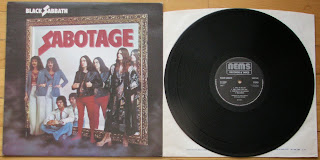 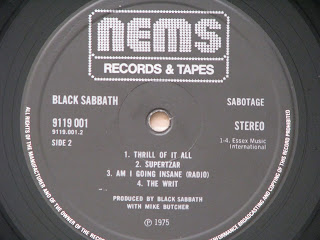 That’s it. I still own all my Canadian pressings of these albums as well as everything from Technical Ecstasy all the way up to Headless Cross. Oh and 13. Can’t forget the album of the year – 13. I’m not sure how much love they will get now that I have these around though.
This manic exercise put a lot of things in perspective for me. For one thing, you don’t even bat an eye when someone tells you postage will be 25 pounds. In fact you ask if you can pay more as long as it is tracked, insured, triple boxed, use alternate inner sleeves for shipping, etc. Risking corner damage or split seams to save on postage seems insane. I guess that comes from spending two mortgage payments on six records. In our normal collecting world, punks freak if postage is higher than $8. It will be interesting adjusting again.

Black Sabbath are the greatest band of all time. That is all. I sold my soul for rock and roll!

This piece is cross-posted from We Will Bury You! with permission from the author.