What do we mean when we say the site has been “curated?”

One of the consequences of digital media has been an explosion in both the depth and breadth of material available on any subject. Though much of this material is excellent and compelling, it’s located in disparate sites and contexts—gated scholarly journals, discussion forums, blogs, internet magazines.  The breadth of material and its varied locations presents a challenge to anyone hoping to compile a collection of work on a single subject. Rather than attempt to find and judge the very best work on a topic, American History Now captures some of the most compelling of that work and highlights it in new contexts through the creation of a digital exhibit. 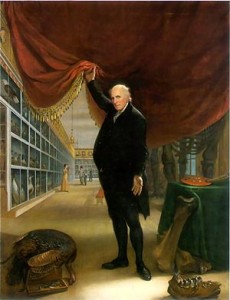 Charles Wilson Peale’s The Artist in His Museum

Different from an editor or a professional museum curator, we have imagined a digital curator through the image evoked by Charles Wilson Peale’s self-portrait, The Artist in His Museum. Peale was an accomplished painter with a deep interest in enlightenment sciences and the wide range of disciplines they involved. He was an inveterate collector with a passion for sharing his finds, and he founded the Philadelphia Museum, later known as Peale’s American Museum. Often credited with being one of the first museums in the US, Peale’s museum was eclectic and playful, a collection of objects and artifacts biological, archeological and artistic. It was “wonderful” in the sense of being “full of wonder,” a large-scale cabinet of curiosities that offered the public a rare opportunity to view the objects it displayed.

Despite the eclectic nature of both Peale and his collection, it was also a serious attempt to bring together natural phenomena and form new categories of knowledge. Peale’s museum was among the first to adopt Linnaean taxonomy and became a repository for archeological finds from the American West. By presenting his materials to the public in new contexts, he was able to shift their understanding of a painting or a mastodon bone. He was able to expand definitions of what it meant to be American, scientific, and worthy of consideration by the public.

American History Now has developed its principles of curation with Peale’s mission in mind. These principles include making a contribution as well as collecting, so we will solicit original material in addition to republishing work found elsewhere. At the end of the project in April, 2014, we will publishing an ebook exhibit to capture some of the work published here in a more stable format. We will link back to content found on personal blogs and websites, so that you can always find the material in its original context. And we will depend heavily on the feedback and commentary of the community to determine what pieces are highlighted and given additional attention. Through an approach to curation that focuses on collecting, juxtaposing and framing ideas, we also hope to shift your understanding and expand your definitions of the history of vinyl.  As, like Charles Wilson Peale, we confront a revolution in communications and access to information, we would like to recover some of the promiscuous wonder that Peales’ museum provided, some of the eclecticism, some of the playfulness. We hope to challenge the boundaries of scholarly communities and scholarly communications, building a community of readers, researchers, and writers united by their interest in American History Now.