A Surprising Advantage of Vinyl

I am emphatically not an audiophile. My home contains neither $500 ethernet cables nor “acoustic isolation platforms.” I am absolutely not here to convince you that vinyl recordings sound inherently better than the same data on CD.

But: there is one absolutely irrefutable advantage to many modern vinyl releases, and that virtue has nothing at all to do with the medium. It’s the data on the record that’s superior, and it’s a conscious choice made by today’s artists and producers.

Perhaps you’ve heard of the loudness war. Essentially, tracks are being mixed louder and louder in production—maybe because when played on a radio station, a slightly hotter recording will sound more intense than the track which preceded it; maybe because loud audio sounds better on cheap speakers. The volume’s been creeping up, up, up, far past the point where peaks got clipped against the dynamic “ceiling.”

Below are the left channels from Radiohead’s “15 Step”. On top, the vinyl’s audio; below, the CD’s: 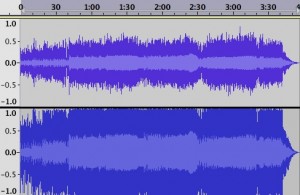 If we were to scale the CD’s audio to the same average volume as the vinyl’s, we can literally see the missing data: 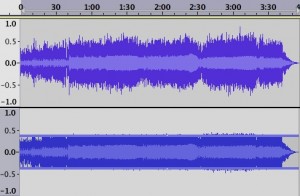 Of course, your eyes can’t be the judge here. Only your ears can choose the winner. Here are 15 seconds from “15 Step,” first from the CD, then the same sample from the vinyl:

It’s not just Radiohead. This effect manifests on almost every modern mainstream release which had a vinyl edition: everyone from Arcade Fire to Ben Folds to Mars Volta. Maybe it’s time to hit up your local record store.

This piece is cross-posted from Square Signals with permission from the author.